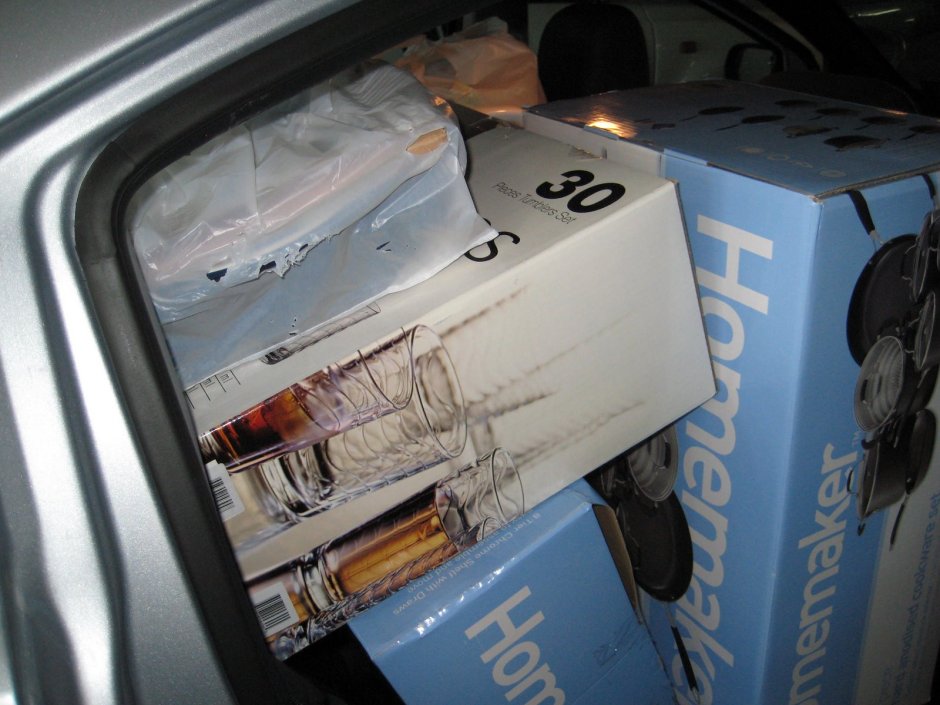 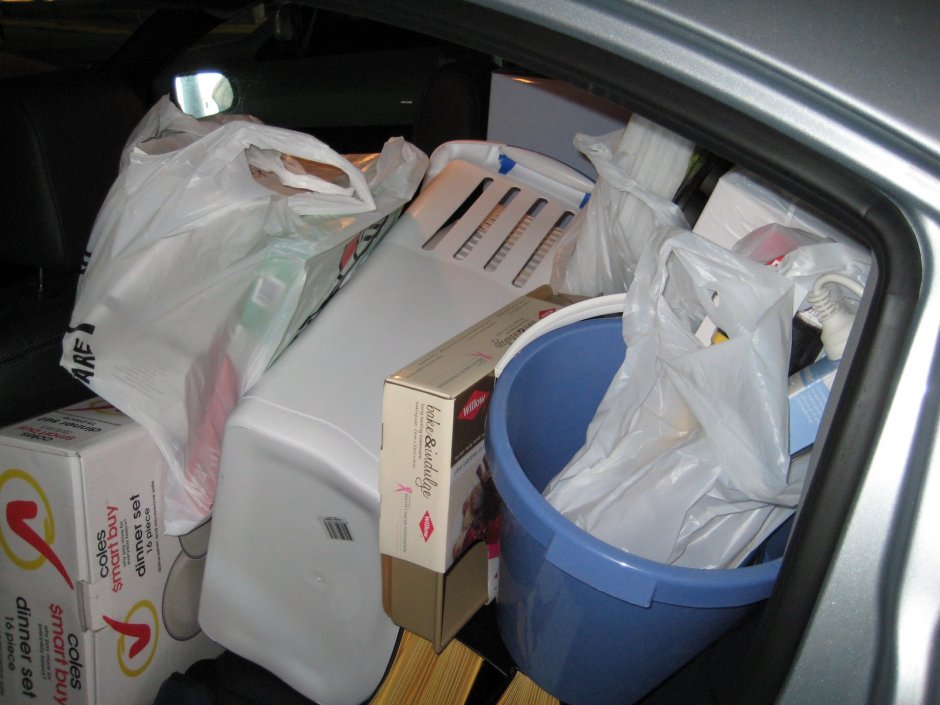 Back seat and trunk filled to the max!!!
We had a GREAT day!!! The Jazz Festival last night did keep us up a bit—out the balcony we had one set of music and out the bedroom side we had another stage full of music till midnight but at least it was good music!! We watched a little of the opening ceremonies of the Olympics and crashed in between loud music!! This morning we were awakened early again to another fire alarm—-pulled on clothes, went out and watched 3 firemen amble through the building….never did get the “all clear” but they left so we figured we could go back in!!! One lady on our floor had pulled all her luggage out and was trying to get it down the stairwell (we are on the 7th floor) and we told her to just hang out since we had seen the firemen walking through and they weren’t evacuating the building at that point. Poor thing had stuffed all her stuff in and drug it out in very short time!! Obviously she has not been here as long as we have to experience the numerous fire alarms!!!

We took off to finish shopping for the house—well maybe not finish but finish filling up the car!!! We made a trip to Kmart which really was not too bad—they had a lot of the stuff I needed/wanted and then we were off to Big W to find some more things to cram in the car. We filled it up as you can see from the pictures. Still have some more things to get but there was no more room so we quit for the day and headed up to Saunders Beach to drop it all off in the house.

Rodney and his wife Liz were there and we had such a nice time with them! They were working on painting and cleaning the house up and getting it ready for us so we moved all the stuff into the one closet and then joined them on the deck for a glass of wine while we watched the ocean—–I am going to LOVE it there!!! We ended up spending a couple hours with them and just had such a nice time—they are both really nice people and we promised them that we would take care of the house. We still did not get the gas stove to work—-he was going to figure that out for us—either the ignitor does not work or something—we didn’t have one of those gas lighter things to test it with but he had just gotten the tanks filled up so there is gas there—just couldn’t get the stove to work which is kind of crucial. He told us he would figure it out (they have never lived in this house so they have never used the stove / oven but the former renters never said anything about it. I am sure that if there is a problem he will get it fixed for us before we move in.

So after a wonderful 2 hours with them we decided it was time to head home to the Quest, we changed clothes and went down to listen to some of the jazz and eat a nice meal at the SugaTrain restaurant. YUM! I had a great steak and Chris had some chicken breast thing and of course we shared dessert–Mississippi Mud Cake with a raspberry compote. Double yum!

The music is blaring outside and we are trying to find the Olympics on tv but can’t find it. Oh and there is a a young man staying at the Quest who is here for a couple weeks training for the paralympics and will go to Bejjing in a couple of weeks. We rode down in the lift with he and his bike today and I have seen him riding while I have been walking–nice guy–I have to find his name someplace. He told us but I didn’t really understand it and we told him we would be cheering for him so i had better find out who to cheer for. He seems very serious about his training that is for sure!!! I will post pictures of the loaded boot and car!!!! I am about shopped out though!!