During the month of December I designated Comments for a Cause to go to UMCOR specifically directed to relief efforts for Tyhoon Haiyan in the Philippines.  I am happy to report that with your help we will be donating $234.50 to UMCOR directly for aid to continue to be given to help the folks in this disaster ravaged area.   Our family also designated this as the Christmas charity this year so it was a family effort also and I am thrilled that so much was donated to help in this extreme time of need.

One of the joys of being a parent is watching your children grow up into productive and amazing young men and women.  Chris and I have been blessed by our sons, Micah and Aaron, and know that there have been a lot of people along the way who have been mentors and advisors when we were not there to offer that wisdom.  There have been a myriad of folks who have seen things in our boys and encouraged and guided and we are so grateful for them.   Which leads me to our next Comments for a Cause for January.

Our youngest, Aaron, has had an amazing time since graduation from NCSU and beginning his career with Cisco.  He has been blessed with working with a lot of really great folks and one of them, Marian, has been a wonderful mentor and friend.  That is why is was a no brainer when Aaron sent me a text saying that Marian’s husband, Dave, was going on an “adventure” for a cause and maybe this would be a good Comments for a Cause recipient. 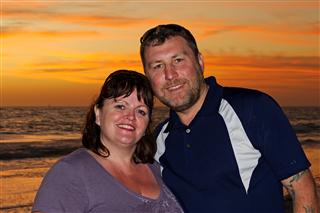 Dave Courtenay is a motivated man.   He has a goal and we are all going to be able to be a part of seeing him achieve his goal as he walks “the Camino de Santiago” in April 2014 to raise funds for cancer research as cancer has touched his life time and time again. Dave will be walking the Camino Frances which originates in France and ends in Spain. Quite a feat and one that I am thrilled to be a small part of.  In Dave’s own words from his blog at The Way–My Way

As with all things its best to start at the beginning and give you an idea of what, why and where.  I am 50 year old male born in Britain and proud of it, over the years I have lived in Northern France and Switzerland before moving to North Carolina in the USA 4+ years ago.
I love to travel and so far have visited over 20 countries, I have 4 brothers of which 3 have suffered from various forms of cancer.  Over the last 3 years I have lost two of my brothers to cancer which has been incredibly hard.  It was after my brother Gerald passed that I decided that I would do something about it.  My brothers had been diagnosed with cancer in their 50’s and now that I am 50 it was time to change my lifestyle.
I had watched the movie ‘The Way’ with Martin Sheen over a year ago and after my 2nd brother died I found the movie on Netflix so I watched it again and an idea started to form.  After talking to my wife I decided that I would walk ‘the Camino De Santiago’ also known as ‘The Way’, an 800km pilgrimage across France and Spain.  I will be walking to raise funds for Cancer research (more of which in a later blog), I plan to start my walk in April 2014 and hope to finish in around 35-36 day.  I will be walking the Camino Frances which starts at St Jean Pied De Port in France and ends at Santiago De Compostela in Spain.  My Wife plans on meeting me in Sarria in Spain and walking the last 70 miles to Santiago.

Please join me in wishing Dave well and joining in by following along on his blog at The Way–My Way and by commenting here as frequently as you can.  Remember that each legitimate comment on any post (not just those posted in January 2014) can add another 50 cents to the total sponsorship of Dave through Cancer Research Institute.  You can view his personal site here and make a donation of your own if you would like. I also believe we might be in store to see some beautiful photographs as a result as Dave is a professional photographer.

For more information about the pilgrimage routes please click here.

Happy 2014 to everyone!!!  May your year be filled with all of the things that you love the most!