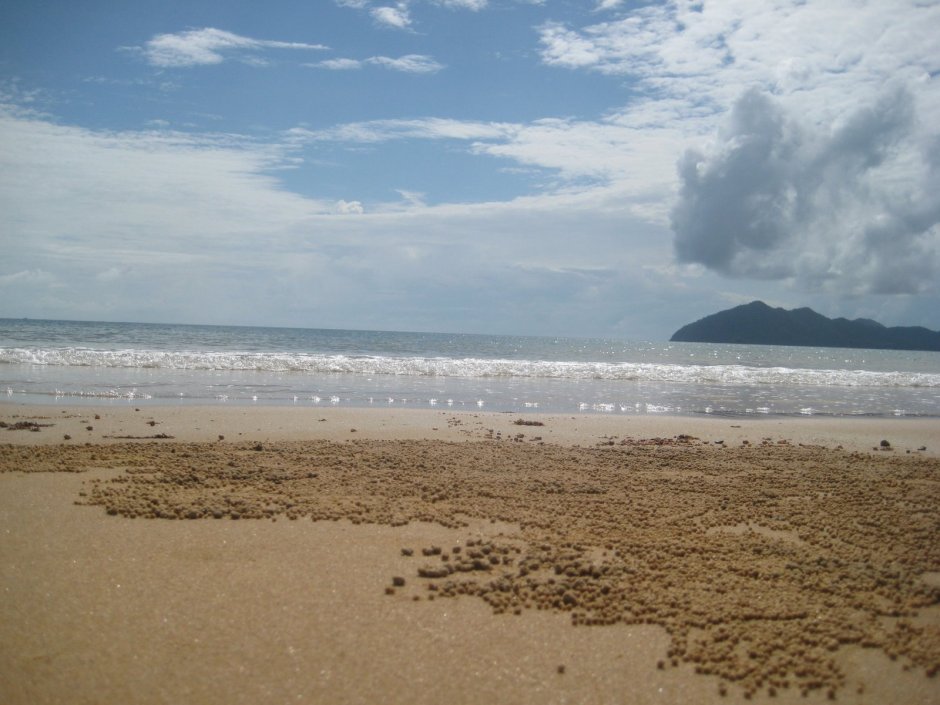 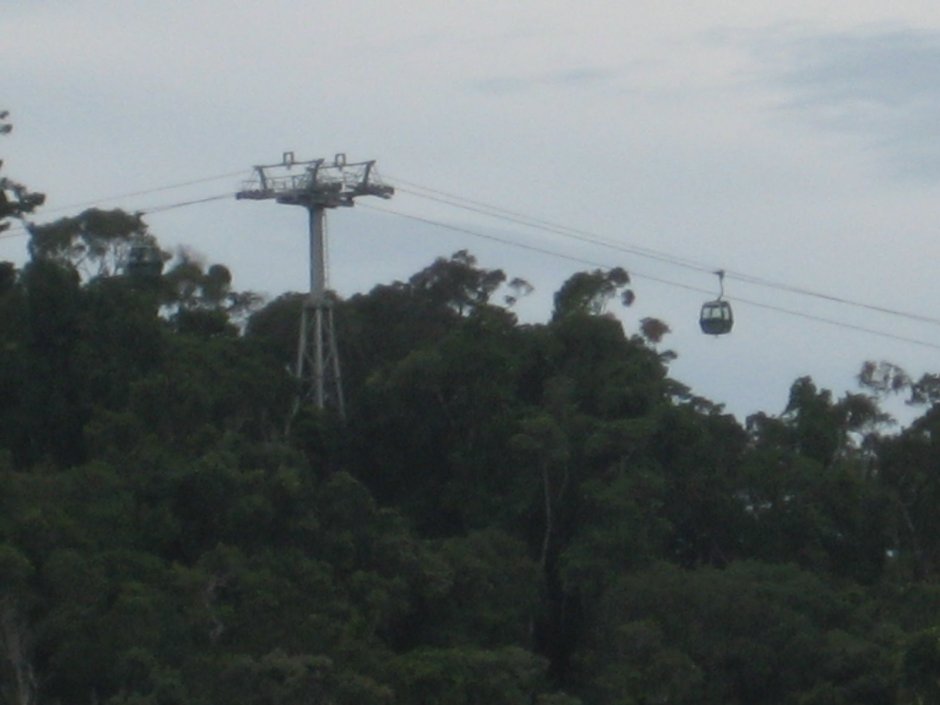 SkyRail over the Rainforest

A view over the rainforest

Looking at Cairns from the Sky Ride

Aaron and his friend the Cassowary
We are back in Saunders Beach after quite a long and eventful weekend. We had a great time and ended up changing plans a bit but it all worked out!!! We met Chris in Ingham on Friday afternoon at the mill there—–I had never been to that mill before so Aaron called and he guided us in and we met him in the parking lot before heading north. We stopped at a little fish and chips place which was pretty much a hole in the wall and had the authentic fish and chips (barramundi) in the foil and wrapped in paper. It was a little hard to drive and eat so since I had the first driving shift Chris fed me little pieces at a time—isn’t that sweet??? And yes, I am driving a lot now—especially when we are going places long distance because Chris is always on the phone so it is just easier for me to drive and then he doesn’t have to worry about it at all!!!

It took what seemed like forever on a really windy narrow road after we got through Cairns to get to Port Douglas where we were staying at the Rydges Sabaya resort. We had a great little 2 bedroom apt but found out when we got up in the morning that the air con in the boys’ room did not work and it was pretty sweltering in there so later in the day they ended up moving us to a different place because they could not get it working. Ah well. It was okay. We got up and got all ready to go catch our ride to go out to the Great Barrier Reef and as we got in line I looked at Aaron who had gotten very pale, he left and went and threw up in a bush….so we decided to ditch the trip for the day and see if we could do it on Sunday. There is no way I would want to go out on a boat when I was sick !!! Poor Aaron felt really badly about it but the rest of us were okay—we tucked him into our bed since we had the room with the AC and then Thom and Chris and I hung out together at the pool. It was a hot hot day but nice in the pool. Aaron pretty much laid around and slept all day and that was what he needed. We tried the next morning to go on the trip again but this time Aaron was having different problems and it just wasn’t going to work. I know he was upset but we were not out any money and we are going to try to get them out to the reef from Townsville this week if we can work it all out. But sometimes you just can’t do something and you go with the flow. And I could not imagine being sick on a ship out in the middle of the ocean!!! Ugh.

Sunday Chris and Thom and i went to breakfast and then Chris and I ran into Port Douglas to find some medicine to help Aaron’s symptoms and found out that they have a nice market on Sundays. We gave Aaron all morning to recoup and get to feeling better and then we headed to the market and walked around. I found a couple things (of course!) and Chris and I will definitely go back there sometime. It has a great beach called Four Mile Beach and lots of neat shops and resorts to go to so there is not a lack of anything to do. The road in the daylight was much better than it was coming after dark!!!

We headed towards Cairns and Aaron was feeling well enough that we thought we would venture into the rainforest a bit. There is a Sky Rail ride that you can take over the rain forest to the town of Kuranda which is a neat little place with a lot of neat touristy shops but a fun place to walk around. There were some hiking trails that we did not get to explore but let me tell you one thing—-it was humid and hot. I usually don’t really sweat that much but the sweat was just pouring off my face!!! Whew!!! We ate lunch and did a bit of shopping, talked it up with several of the shop owners of course. They all seem intrigued by us for some reason. One couple had a nice little souvenir shop that I bought a bunch of stuff at and we got into quite a conversation with them. He was a trucker so he was telling us all about some of his jobs and all and they really were very nice. I find that most people are if you just treat them with a bit of kindness instead of being all business like!!! And like I said–I think we intrigue them or something!

We took the train back to where we parked our car—an hour and half trek through the rainforest and rocks and we saw some great things including some beautiful waterfalls along the way. I think there were 15 tunnels to go through so that was kind of neat! I can’t imagine building that railway!!! It used to be used for transportation but now it is just the scenic train that uses it if I understood correctly. It was fun and the best part—they brought us nice cool towels to wash up with on the way!!! Much appreciated!!!

We headed out and were to spend the night at a place in Mission Beach—or so we thought. I was driving (again!) and I had printed out the webpage with a little map on it. Chris had made the reservations so I didn’t really know what the place was. Well, let me tell you—I turned around in some pretty weird places and by the end of it there was just a teeny tiny bit of tension in the car. We were all hungry and tired and it was late and very dark and we just couldn’t find the place. Then Chris tried calling, got the owner and found out the key was at reception but then he lost the connection and couldn’t get directions. We stopped to ask directions, the guy gave us totally wrong directions and finally Aaron came to the rescue with his IPhone as it finally got service!!! Found the street and realized that it was not Mission Beach but another little beach down the way a bit! Still took a bit of driving around to find it but we did and got all our stuff unloaded. Whew. Walked down the street a bit to a bar where a band was playing (pretty bad music, too) but it had food and that was what we wanted. Of course the girl who took our order was a flake and totally ignored Thom’s order so he had to reorder and eat his after the rest of us were done!!! I stayed up with the boys a bit and talked and watched tv and Chris crashed! We both slept well and then he got up and did a few hours of work before we took a walk on the beach. The boys were going to hit the beach but opted to sleep, Aaron is still not back up to 100% but he is getting there.

We loaded up and headed back to Ingham where we dropped Chris off to work for a few hours while the boys and I went “to town”. I took them to the cemetary which is really a neat place—-it is a very strong Italian town so there is a huge Catholic Italian population. The cemetaries are very ornate and the mausoleums are huge and beautiful. I am going to post some pictures later of them because they are just beautiful. We headed into town where the boys were so happy to find the thing that they have both wanted—–short shorts. The older men here in Australia quite often wear these really short shorts and we found them. Both of the boys got a pair so they can go back to the US with the “look”. I had to laugh—they were having so much fun trying them on! Kids.

We picked Chris up after some shopping and headed home—-the house was still here and not as hot as I thought it would be so we unloaded (once again!!!) and settled in for the night. I made a special dish for dinner tonight—-tacos with kangaroo mince……I just couldn’t bring myself to eat it but everyone else did and said it was good.

Tomorrow is going to be our Thanksgiving finally! I have gas in the stove and bought another pumpkin so I am ready to go!!! Hope all of you had a great Thanksgiving!!!!
Oh–and add my friend Rhonda ‘s husband Peter to your prayer list —he had 2 heart attacks and is doing okay I guess (don’t know any of the details) but I am sure that a few prayers from my friends would not hurt in the least!!!