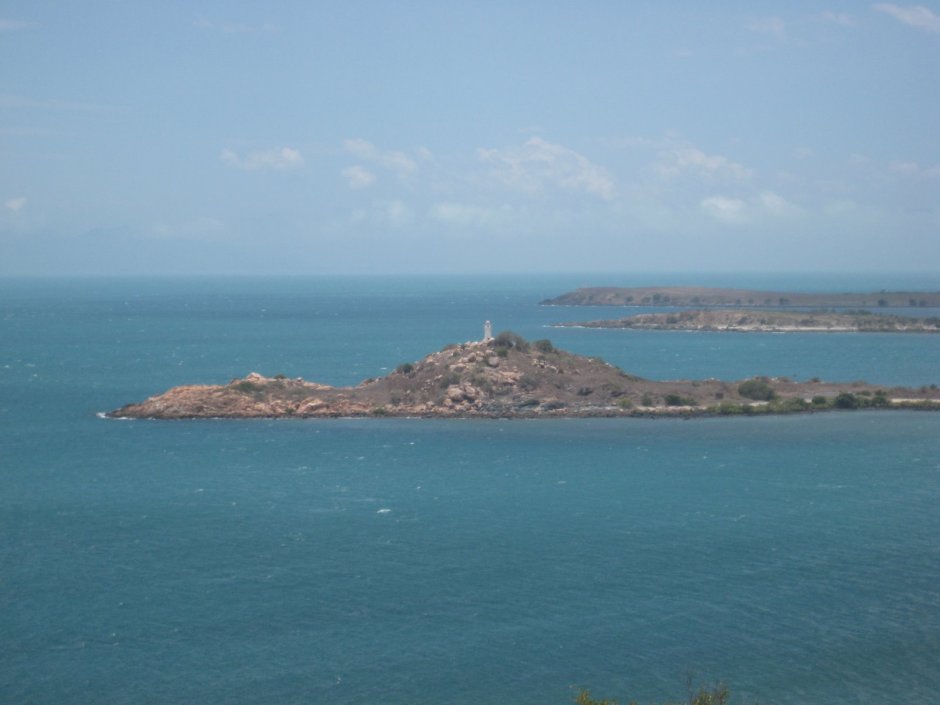 Looking out from Flagstaff Hill near Bowen

Waves crashing on the window of the boat on the way back from the Whitsundays!

Aaron and Thomas trying to dry out after the first boat ride to the islands!
We are back from a fantastic weekend!!! I am kind of tired so I hope that this makes sense!!! Friday we were supposed to pick Chris up from the airport around 6 pm and leave from there for Airlie Beach but……the flight kept getting delayed so the plans changed!!! Chris’ boss and another CSR person and Chris ended up using the rental car they had in Mackay and driving back to Townsville. So the boys and I loaded up the car and started driving with the plan to meet them on the road someplace! It took forever to get through Townsville since we were hitting it right around 5 on a Friday afternoon but we did and finally met Chris at a servo 2 hours or so down the road. From there we drove to Airlie Beach, checked into our cute little bed and breakfast and then walked downtown to Hogs Breath Cafe for a bite to eat.

Saturday morning I got up early and headed to the shower to get ready for our big adventure to the Whitsundays Islands and was greeted with a trickle of water and then no water!!! I gave it some time but it didn’t get better so Chris went up to call the owner at 6:30 am to find out what the deal was. Evidentially some “hooligan” had turned her water off during the night—the bed and breakfast is on the waterfront and there is a big park right below it so there is a lot of “activity” there and someone was just messing around. I am VERY glad it was easily fixed or we would have not had such a great start to the day ! After we all got ready we headed to the harbor to catch the boat to the first island. We had gotten an island hopper pass so we could do whatever we wanted on our own timetable and it did turn out to be the best way for us to do it. We got on the boat and decided to sit on the top deck. BIG MISTAKE!!!!! Can I say that again?? BIG MASSIVE MISTAKE! Once we started the captain told us we might want to sit on the right side of the boat to avoid getting splashed as it was really rough out. We scooted over as far as we could but alas—–it was not far enough. NO ONE was safe on the top deck. We got totally drenched and it was combination of salt water and suntan lotion dripping in our eyes!!! I was not even dry by the end of the day and my big complaint was that my hair was a total wreck the rest of the day—so don’t expect to see any cute “couple pictures”!!! We managed to make our way down to the bottom of the boat and stood down there but still got sprayed !! but it was fun but not quite the way I thought the day would start.

We visited South Molle Island first, walked around a bit, sat by the pool and had a coffee while the boys went to the beach for a bit. This cruise really just took you to the different resorts on the islands and you could just use the pools, the beaches, whatever for as long as you wanted to. There were some hiking trails but we never were really able to find where we were supposed to go for that and we decided that we wanted to catch the boat to the next place. This time we went downstairs……

The next stop was Daydream Island and it was really more developed and a beatiful resort. Our tour guide for the day, Aaron, led the way and we found our way around the island, grabbed some lunch, looked at the living reef lagoons that they had,walked around, took pictures of the pretty things—-including the 3 bigger than life mermaids that welcomed you to the island. Great photo opportunity—I was thinking that there must be millions of pictures of those mermaids with various people. I took pictures of the boys but Chris was pretty laid back by then so he wasn’t into being photographed!

We really had fun but the boys were getting a little sunburned despite the sunscreen being applied all the time—-and we were all getting a little tired so we decided to forego the next island and just head home. Whew—the ride back was REALLY choppy and we got seats in the enclosed part below and the water was just crashing over the windows the whole trip so we were very glad to be below.

We got back to the bed and breakfast, showered and headed out for dinner at a nice little place that Chris and i had eaten before. The boys were going to go out later and check out the town but everyone was a little lethargic from the day in the sun so they decided to skip it and just stay in. I found the bed and breakfast cat to play with and enticed it to come in for awhile (think I miss my kitties??) and then we all crashed.

Slept in a bit this morning and then headed into town to walk around but it was so crazy hot we were all just melting away so instead of shopping like I wanted to we headed out of town. I did find a shop that had aboriginal art that seemed pretty authentic so i bought a couple small pictures that I will have to get stretched someplace but they will be a great memento of Australia when we leave. We drove to Bowen, found some great beaches and waded a bit before heading back home. We did stop in Ayr at the house so the boys could see where we go a couple days a week, showed them the mills and even stopped for cane trains! The horsies were in the mango grove by the house so I stopped and gave them apples (shhhh–don’t tell their owners!) and gave them a pat! They saw the car and came right over—-last week I gave them carrots so maybe we have something going now.!!!!

We stopped and got Kentucky Fried Chicken on the way home—-sent Aaron and Thom in to order and they came out and said “don’t ever ask us to do that again”. I guess is was a redneck place and pretty confusing and once we got the food home we decided that it was not the KFC that we know!!! Oh well—it was kind of like something from home!!!

We are trying to cool the house down–it is going to be in the 90’s all week it looks like and humid so we will be sweating it but hopefully we can get it cooled down a bit. We are watching the Australian Idol finals tonight and going to crash after that I am sure!!! I will try to post more pictures tomorrow!!!

← Previous Whew boy—It is getting WARM!
Next → Thanksgiving a few days early!!!