What the heck?  What is going on here???  What kind of crazy title is that?  After a couple weeks of not doing much at all housewise we decided today was the day.  I hate disorganization and clutter and we are in the midst of both.  ARGHHHH!   But first–before I start on that rant let me tell you that my sweet blogger friend Bernie at One Mixed Bag gave me an award!!! Woo hoo! Because she was the recipient of said award it was up to her to pass it along to 5 more bloggers and she picked ME! I was so excited!

So now I have an extra little badge on the side of my blog showing that I won the Incredibly Sweet Blog Award!!! I am so happy!

So on with the day!   It was one of those days that the hub and I had agreed had work written all over it.  We played all last weekend and I was pretty much worthless this week at getting anything done so it was time.  I hate a disorganized and cluttered life so this was not helping my mood any at all.  Got up and I just wasn’t feeling it but we had furniture to move and rearrange, recumbent bike to assemble, boxes to flatten and  and get recycled…the list goes on.  You get the picture.  Not fun stuff.  But we had a pact to get it done so we started with the bike.

I picked my job.   I picked putting the high impact flooring together.

Done!  Or so I thought !  But the hub had other ideas.  Like actually helping with the assembly. I might have gotten a little sidetracked along the way.

Now I don’t know about you but I thought this was a great look.  AND a tribute to Carolina and Ramses, their mascot.   Chris was not impressed though he did take my picture.  It was hard to work with this on my head so I goofed off a bit and Chris did the real work.

Buddy and Holly joined in the fun though I think they were more interested in trying to get into the utility room with the furnace and that funny sounding sump pump. 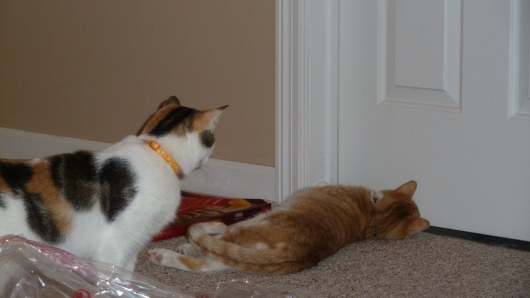 Actually the project went well and the finished product works correctly and came out with no missing parts or extra pieces as far as I know!

Then it was off to the garage to flatten boxes and get things ready to recycle.  I swear those boxes reproduce on their own.  It is crazy how many we had to get rid of but as I was flattening and stomping and stuffing and all I found a box of stuff that Chris’s dad had given me that I had never really opened, I guess!  Gee whiz!  The treasures I found!   I could have used this a few months ago…..and who said I didn’t look good in hats????

Oh and I posted that Fried Macaroni and Cheese recipe under the Recipe page on the left hand side of my blog.  Let me know if you try it!!!