Some of you know our love of the Tim Tam!  Well, imagine my complete joy yesterday when I discovered that Pepperidge Farm has their own offering at Target!!! I took pictures on my phone, emailed them, posted them on Facebook and tagged all my Australian friends!  I was overjoyed to find this little package of wonderfulness.   They do not make my all time favorite one—the mint ones—but these will do, little pig, these will do!!! 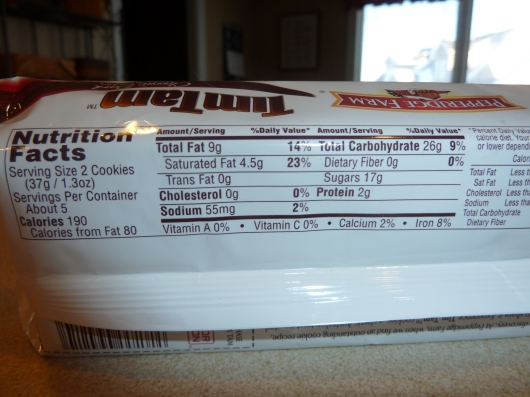 I decided that we should embark upon a comparison so that we could know for a fact if the US version was really going to compare with the Australian version. With that being said—I opened a package of my coveted stash of Australian Tim Tams and a package of the new Pepperidge Farm offerings and we went to work.  My number one taste tester, Chris, was happy to assist me with this non scientific study and the results came in——-after we both did a blind taste test (well his was blind, mine was not since I put them on the plate!) it was agreed that the US version was right up there with the Australian version!  Well done, Pepperidge Farm!  The only thing that may have entered into the taste test that could have influenced the outcome was the fact that the Australian Tim Tam was older=——I had saved it for quite awhile so it was no where as fresh as the one I had just purchased at Target.  You could tell from thc chocolate outside—it was a little whitish in color due to the age.

The Pepperidge Farm version is on the left, the Arnott version on the right.  You can tell that the Australian version is older—notice the whitish color .  How sad.  This was after Chris’s taste test.

And after MY taste test!!! Notice the dainty bite…

I would be remiss if I did not educate my American friends on the Tim Tam Slam. Opposite corners of the Tim Tam are bitten off, one end is submerged in the drink, and the drink sucked through the biscuit. The crisp inside biscuit is softened and the outer chocolate coating begins to melt.

Ideally, the inside of the biscuit should collapse but the outside should remain intact long enough for the liquid to reach the mouth. Refrigerating them helps to preserve the outside coating while allowing the inside of the biscuit to melt. The thicker chocolate coating on the Double Coat Tim Tam offers a more stable structure to prevent a premature collapse. The caramel centre of the Chewy Caramel variety helps to hold the biscuit together for a slightly longer time. When the biscuit collapses it is pushed into the mouth.   (Thanks, Wikipedia, for the description that was way better than I could write.) 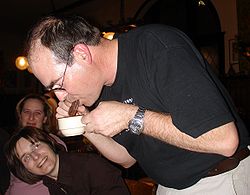 So , my dear friends, head off to Target and indulge in a little Tim Tam extravagance!!!  You will not regret it and I would love to hear about your love of the Tim Tam as well!!!  Cheers!